Editor’s note: Hugo Carts has not yet been released, the review is based on the beta version and the final state may still be under production. We will revisit this review once we get a chance to test the final version.

Sign up with Scatters through this link and get 10 Free Spins when the game goes live!

Hugo is back! The world’s favourite troll is in for another blustery adventure as he heads to the mines.

With his lovely wife Hugolina in tow, Hugo has one goal – to collect as much gold as possible.

But, as usual, the adventure is not that simple! His arch-nemesis, the evil Scylla, is haunting their presence, while the mine carts are very old and rickety. Hanging on to the gold is going to prove quite a challenge.

So pick your choice and feel the rush as you race through the mines as characters race across the reels with every re-spin.

Hugo Carts Online Slot is fast-paced and comes with a great collection of different features.

Dynamic Pay-ways multiply the number of pay-ways that they offer, creating more ways to win with every spin. Hold on. It’s going to be a bumpy ride. 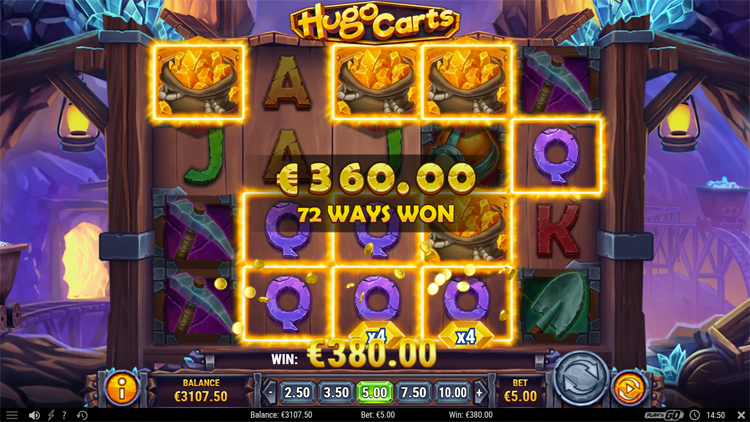 Hugo is a friendly, small Scandinavian folklore troll fighting against evil, often to save his family.

Since its launch in 1990, the Hugo game show was aired in more than 40 countries, spawning dozens of video games for various platforms.

While it may prove to be an impossible task to sum up all of Hugo’s video games due to the impressive number of releases, the crossover to slots is easier to track.

So with all the fame and glory that Hugo collected, it came as no surprise when Play’n GO launched the first Hugo slot game in 2016. It was a great success and so it was expected that Play’n GO launch a sequel, Hugo 2 in 2017.In 2018 Play’n GO launched Hugo Goal online slot, and 2019 saw the launch of Hugo’s Adventure.

And now, in 2021, Play’n GO will be launching yet another Hugo Online Slot, Hugo Carts.

This one seems to be the best of the series, with several useful features and impressive winning potential.

Hugo Carts online slot gives a win each time you land three to five adjacent matching symbols, starting from the first reel. The symbols are quite generic and consist of bright 10-A card icons as the low pays, followed by spades, pickaxes, lamps, and hard hats. The values of the high-paying symbols vary from 1.5x to 3x the stake for a 5-of-a-kind combination. Wild nugget bags pop up on all reels to substitute for any of the pay symbol types. Also, wild win lines are worth up to 10x the stake. 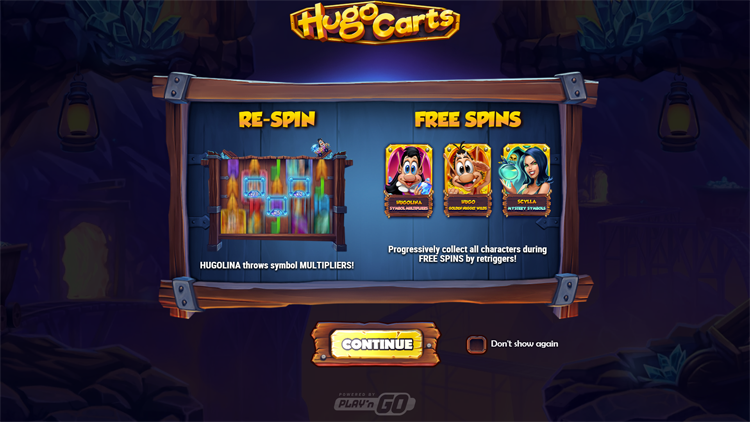 Hugo and his band appear in the game when features are triggered. The three characters in Hugo Carts online slots appear on special symbols that kick-start different effects when they land in the base game. Each character has an assigned reel: Hugolina lands on reel 2, Hugo on reel 3, and the evil Scylla on reel number 4. Any single character or character combination triggers a respin. For the respin, the triggering symbols award a respective modifier: 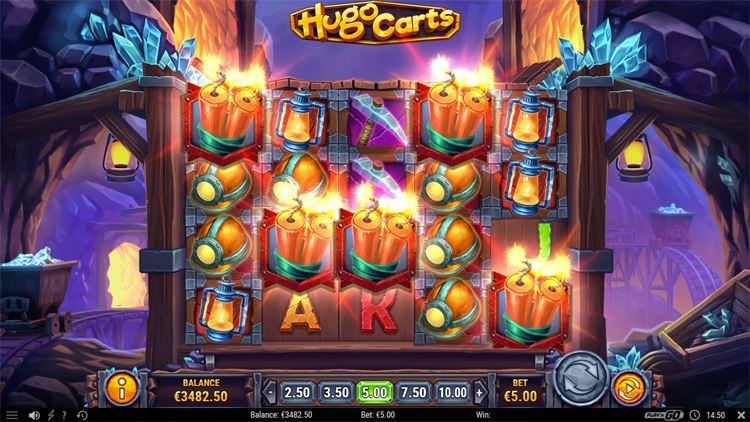 And finally, the last symbol to wish is the dynamite scatter symbol because when you get 3, 4, or 5 of them, you are awarded 7, 9, or 11 free spins, respectively. If you are lucky, Don Croco will appear and throw 2 dynamite scatters on the reels to launch free spins.

Before the free spins kick into play, a character is randomly chosen, and the character’s respective modifier is activated on each free spin. To make it more exciting retriggers kick in if you manage to land 3 more scatter symbols. For the first retrigger, a second character is selected, and their respective modifier is activated on each remaining spin. If you retrigger the feature again, the third character becomes active, so all three modifiers are applied to each free spin. Once you have played all three characters, no more retriggers are possible.

You can play all five Hugo Slots and more than 2,500 online slot games at Scatters New Zealand.