As you have probably figured out by now, we really love Scatters here at Scatters Casino. We went around the office asking people for the first slot which comes to mind when someone says Scatters. We got slots based on the best free spins feature, based on the best looking Scatters symbol, you name it.

Without further ado, here are the top 10 most iconic slots with Scatters, in no particular order: 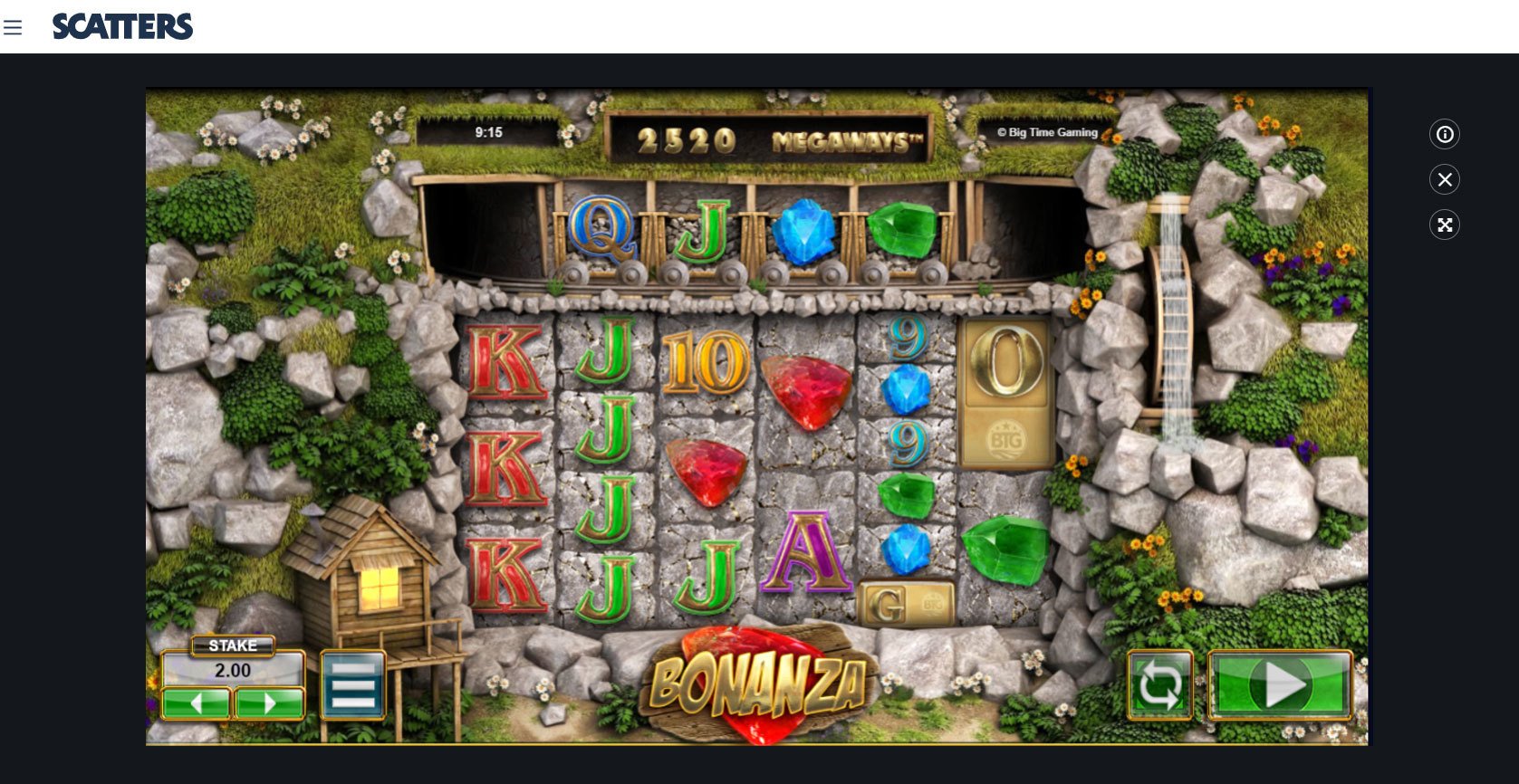 We would not dare to write a top 10 most iconic slots without mentioning Bonanza by Big Time Gaming, the original megaways online slot. As many of you might know, this is one of the more volatile slots on the market. The free spins features are more than far apart, with an average hit rate of less than 1 every 400, so when you actually do finally hit them, you expect to get paid.

Perhaps this is the reason why they choose to form the word G O L D with the four required Scatters. You must not be fooled though, it might say GOLD, but nothing in life is guaranteed and this is most definitely true in the world of online slots. 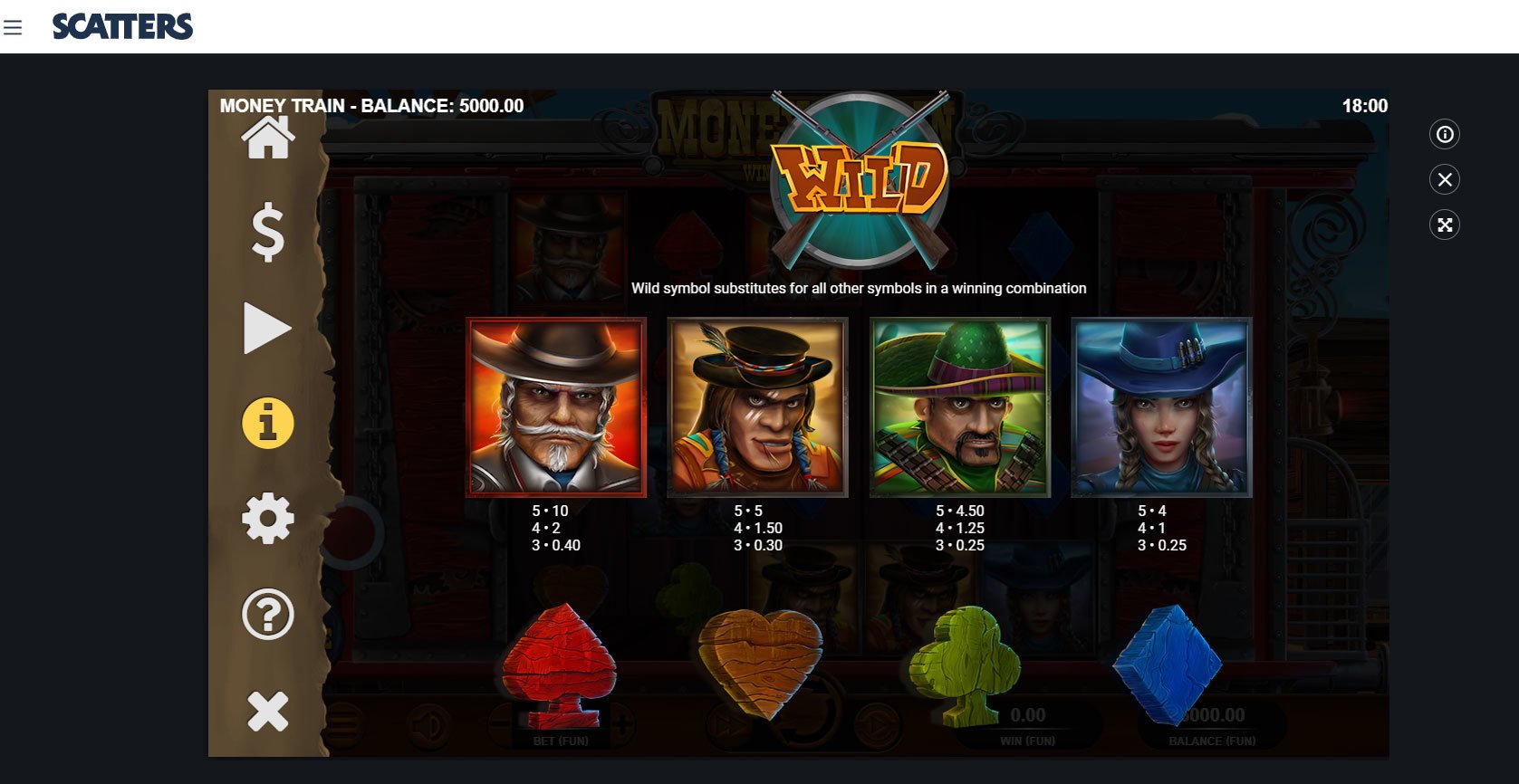 This gem of a slot from Relax Gaming recently hit the news as a couple of Twitch streamers from Finland managed to hit an amazing 20’000x! The Scatters symbols are of simple design in this game, simply the word BONUS on a purple background, no fuzz.

Give Money Train a spin, and you’re likely to keep chugging along until that choo-choo win hits! 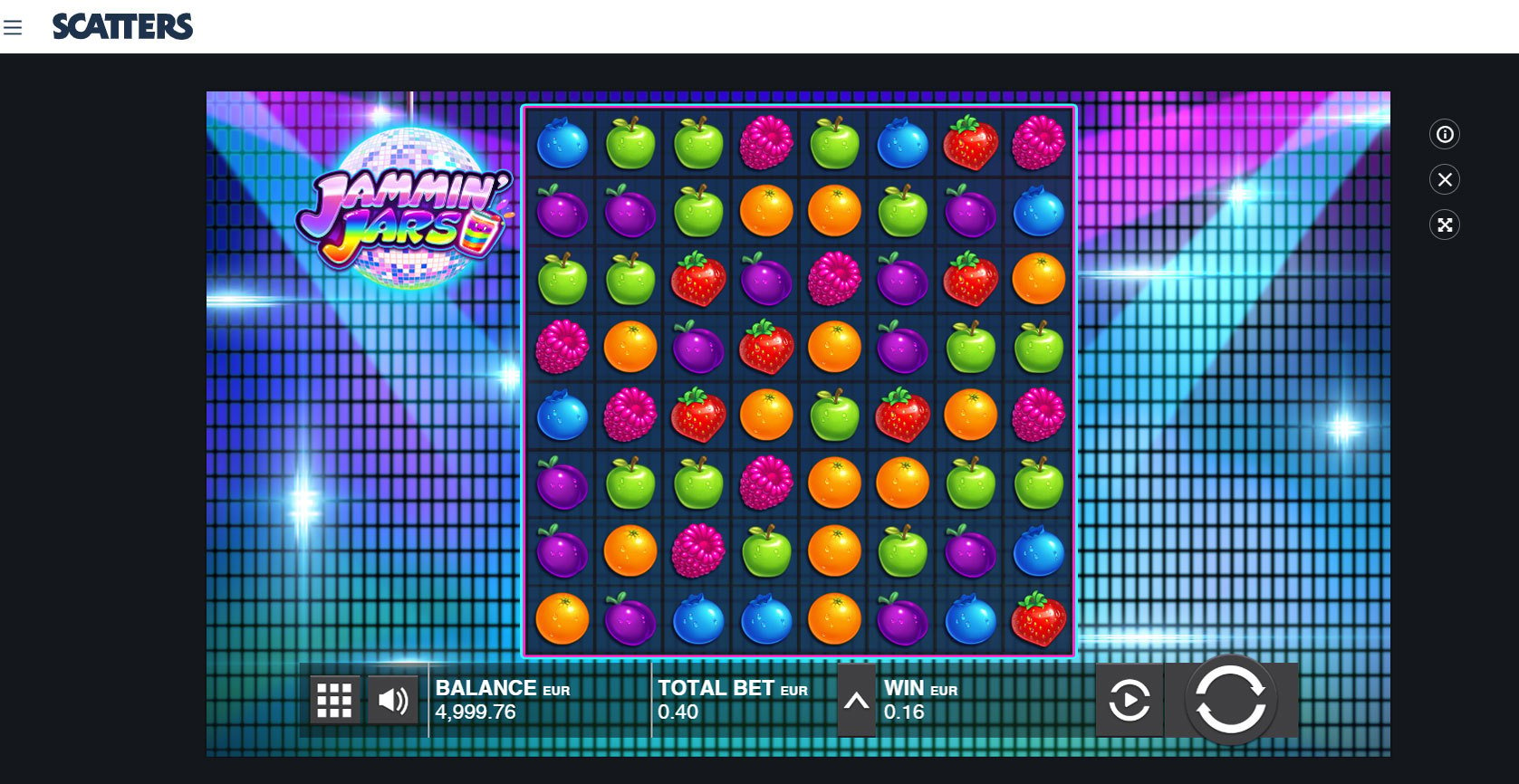 Push Gaming released Jammin Jars in late 2018, and its insane volatility helped make it a smash hit with streamers and high rollers alike. The rainbow layout, flashing lights and 80s disco style makes you want to jump and dance along with the Jars once you get that free rounds feature going. Scatter symbols which are also sticky wilds with increasing multipliers? Can it be real?

Blueprint Gaming liked it so much they made the Dragonfall online slot, where dragon eggs jump and hop around the board. We doubt Push Gaming thought of this as an homage to their creation though. Fun game nonetheless if you are into dungeons and dragons more than jammin jars of jam. 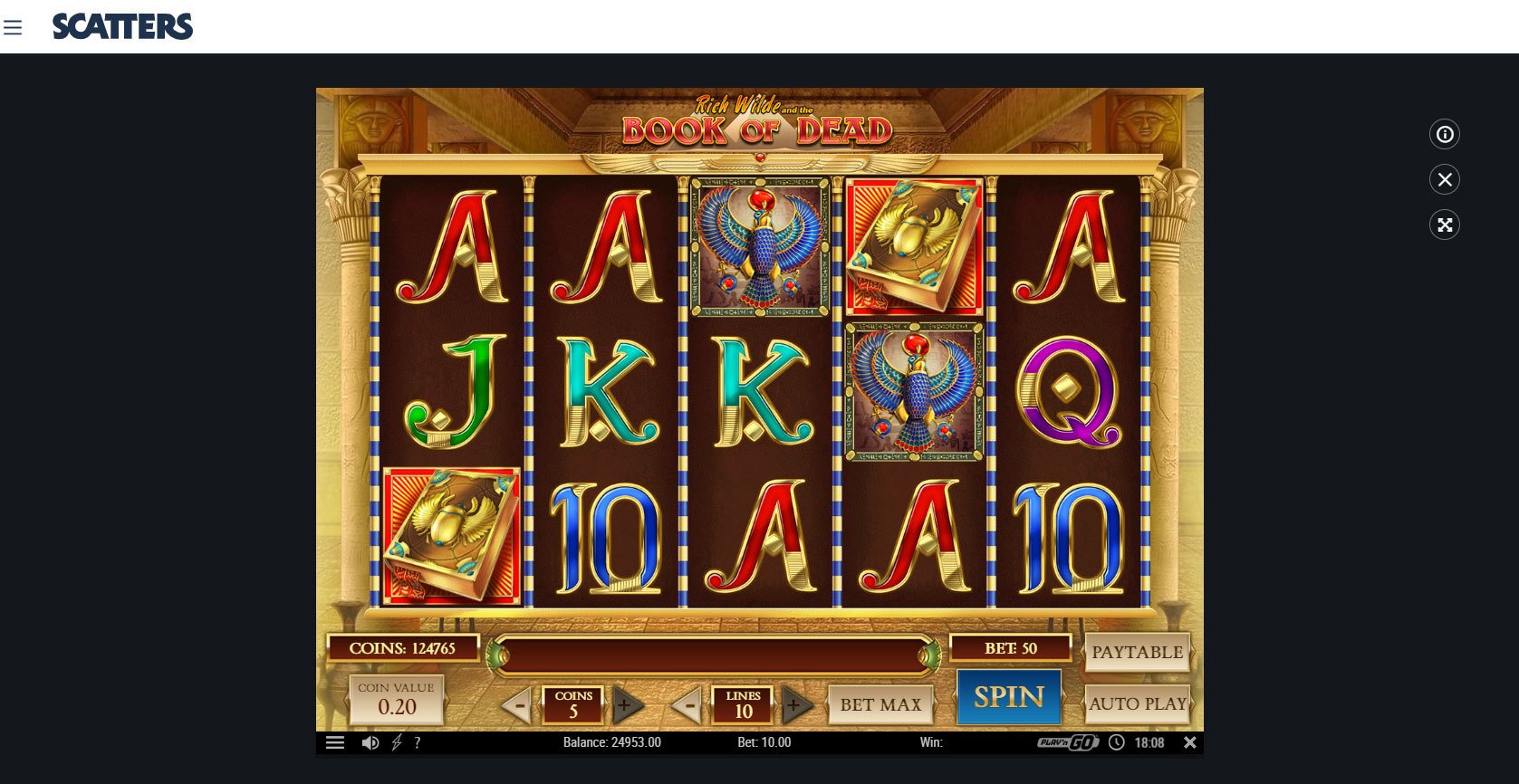 From the halls of the dead comes this beautiful book. We have mentioned the Book of Dead online slot from PlaynGo before, but we felt we could not leave it out of this article. The books are one of the most iconic symbols, working as both a wild and a scatters. The free spins feature special expanding wilds is a very much loved mechanic amongst players and if you haven’t heard about it, there’s only one way to really understand it.

Give Rich Wilde and the Book of Dead online slot a try today! 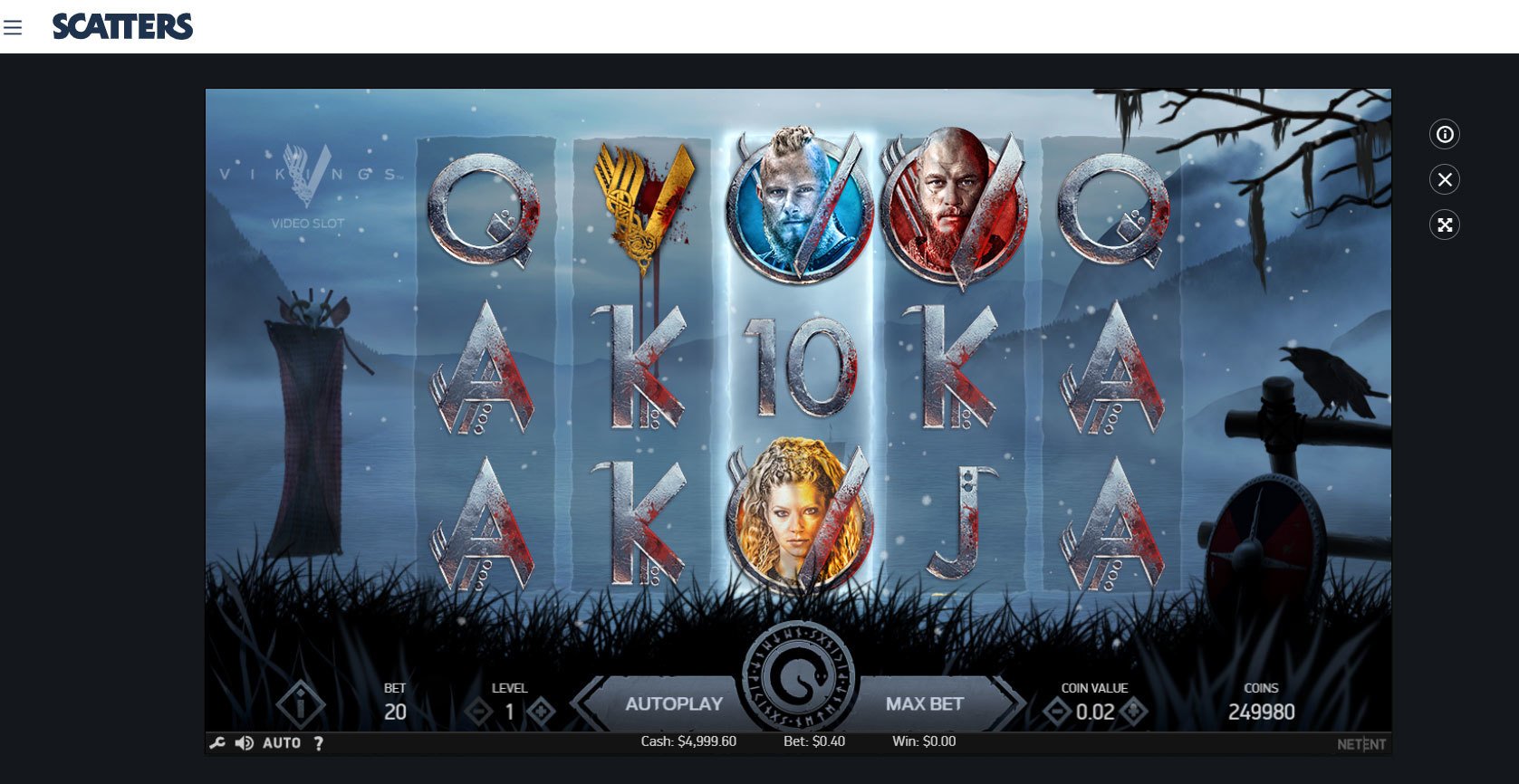 As many of the people here at Scatters are from Nordic countries, we needed at least one slot honoring our heritage.

Naturally, the choice fell upon Vikings by NetEnt.

This online slot is based on the famous and long running TV-show with the same name.

The scatter is in this game symbolized by a shield with the words RAID SPINS. Hitting three of them and watching the game transform into a 7-reel, 5-row playing area is enough to make anyone scream “For Odin!”.

Jack and the Beanstalk 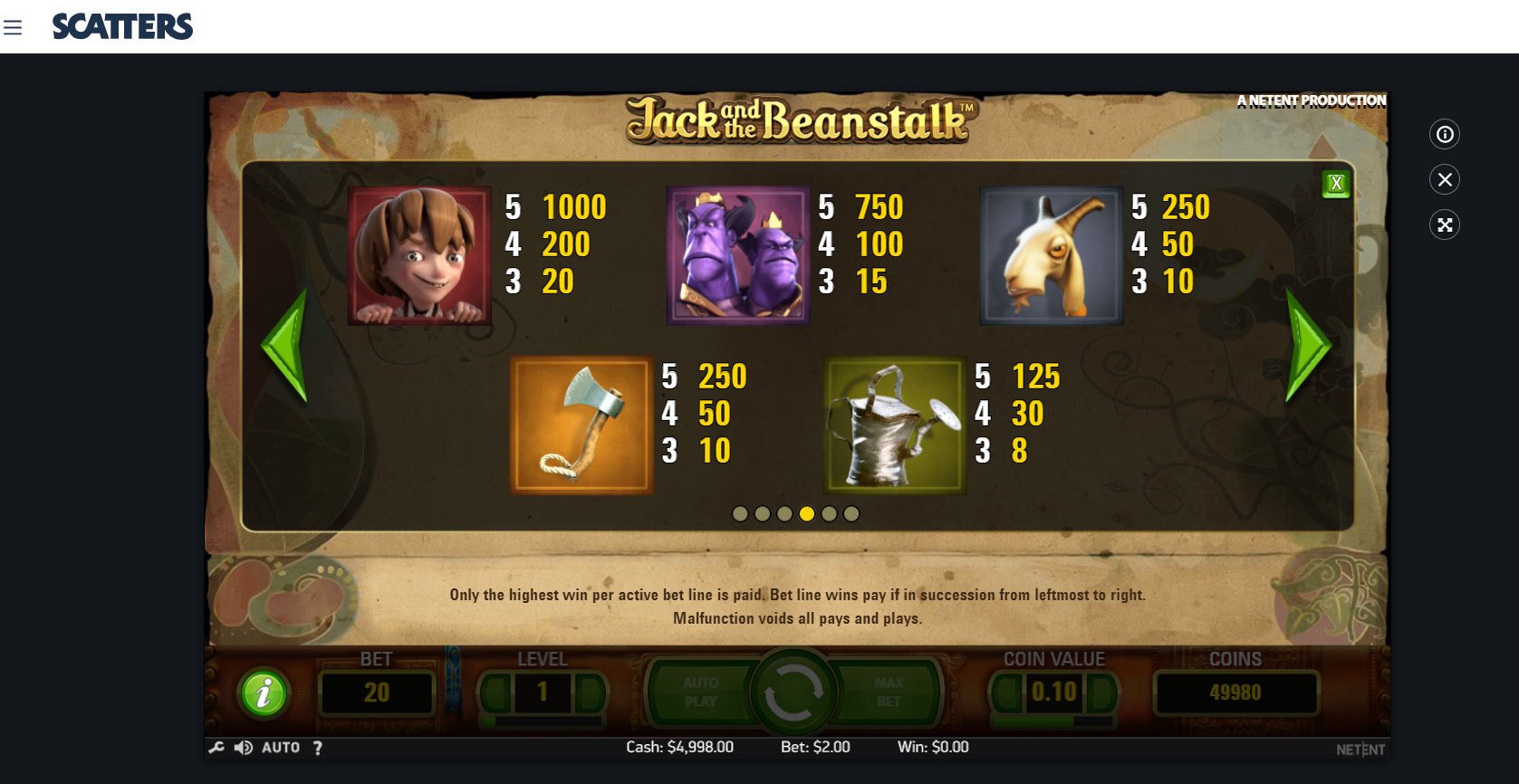 Good ol’ Jack and his Beanstalk. If you have played slots for a while, you will most likely have tried or at least seen this slot at one point or another.

NetEnt put a lot of effort into this slot back in the days and it really shows.

Released over six years ago and still it matches well against today’s slots.

Then there are the harps. We have seen it happen, and we know it is possible, but… this Jack and the Beanstalk slot will have you swearing to get those harps in the free spins feature.

Secrets of the Stones 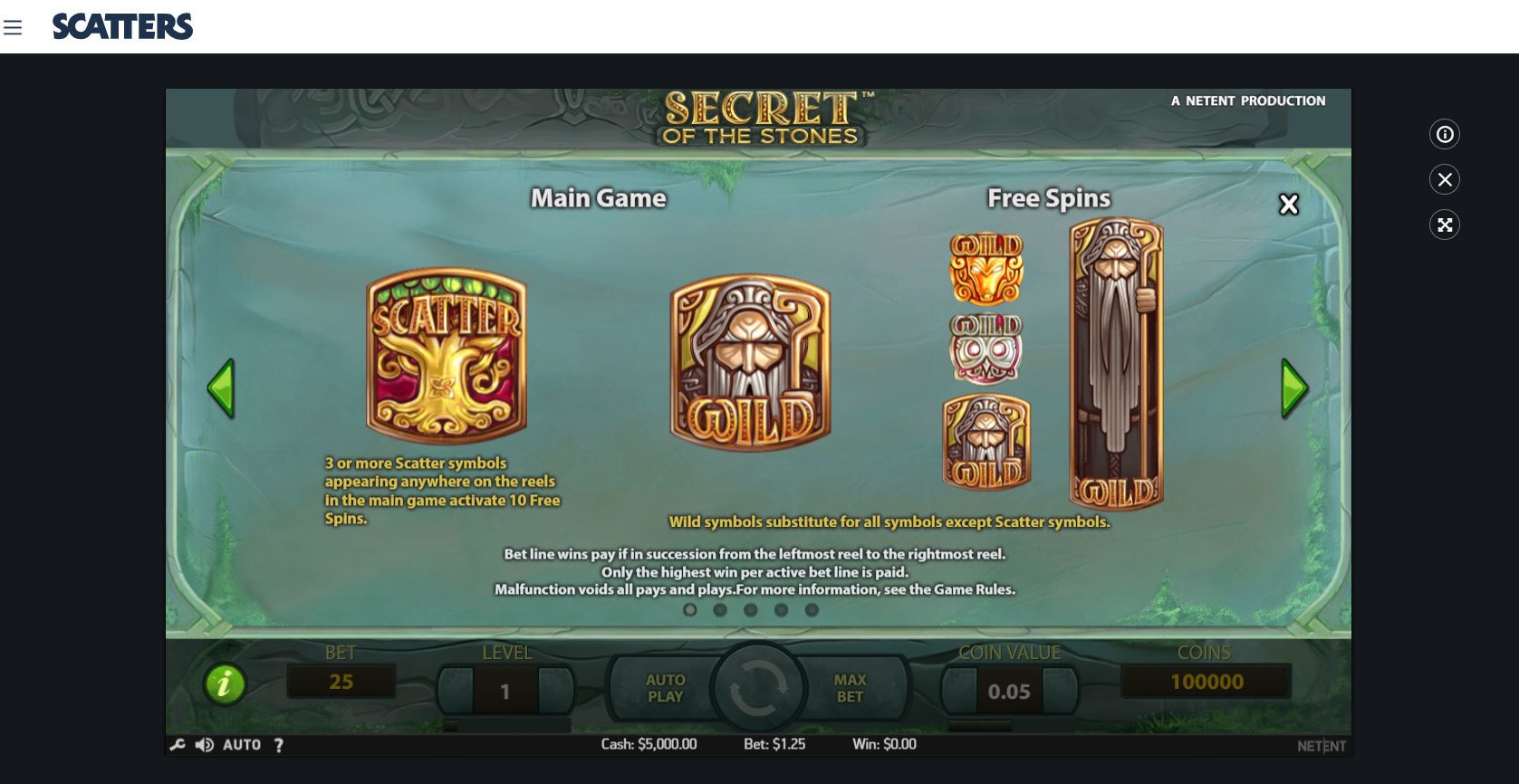 The Secret of the Stones online Slot by NetEnt is one of the more iconic “pick your feature”-slots.

As you hit your three Scatters, a pick me feature offers the player the chance to get higher multipliers, more free spins, wild reels, etc added to their free spins feature.

This slot can pay really well, which is probably why the chance of getting the feature is quite low.

This slot is not for the casual gamer, but if you like the chance to win big, give Secret of the Stones a try

P.S. Secrets of Christmas is the more Christmassy version of the same slot, if you like taking a little less pagan approach to slotting. 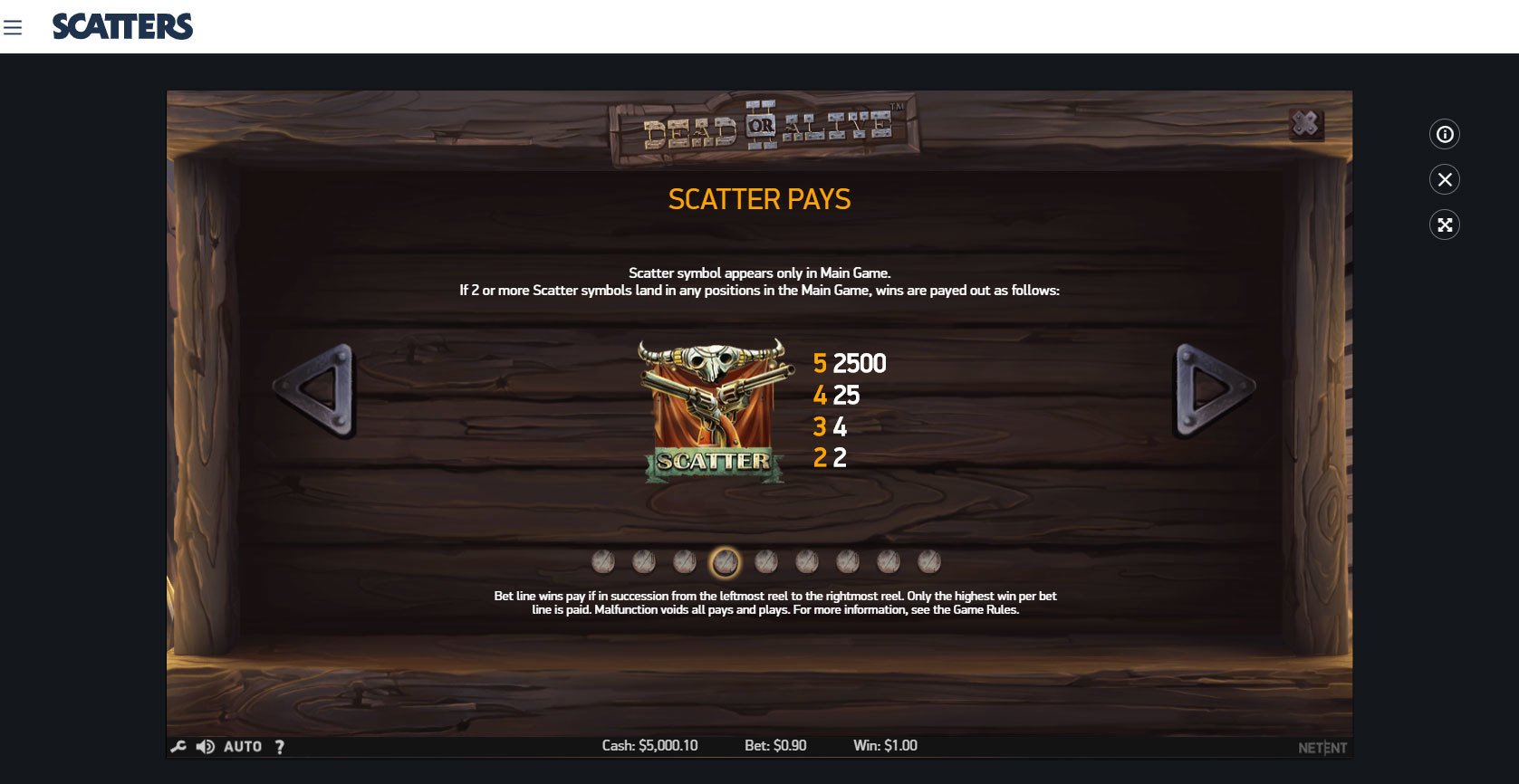 Last year, the sequel to one of the most well-known NetEnt slots was released, Dead or Alive 2.

The first one could make even the strongest man cry of desolation and the sequel can be even more cruel.

Volatility is the name of the game here, and boy can you win big.

Maximum win is a staggering, mind-blowing, 100 000x. Yes, you read that right, one hundred thousand times your bet. Like Bon Jovi would say: Wanted… Dead or Alive. 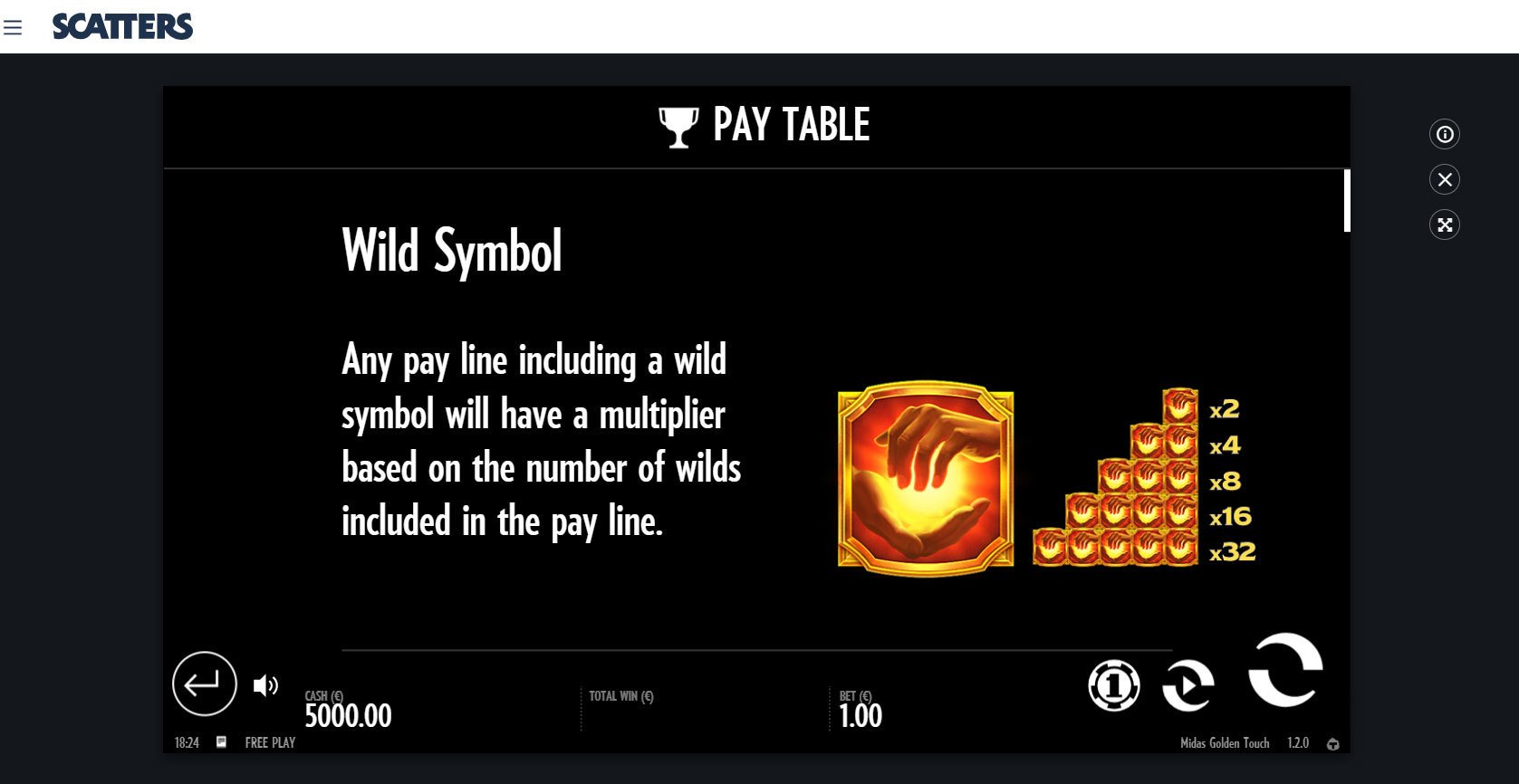 From Thunderkick comes a tribute to the Greek mythos, the Midas Golden Touch online slot.

The hand of King Midas can truly turn everything to gold in this game as it acts as a Wild and doubles any winnings. Two wilds, 4 times the win. Three wilds, 8x and so on.

The feature is filled with sticky respins on every win, so sit down and hope for many hands to help you towards that big win.

Will Midas turn everything he touches into gold for you or will his treasure prove too elusive? 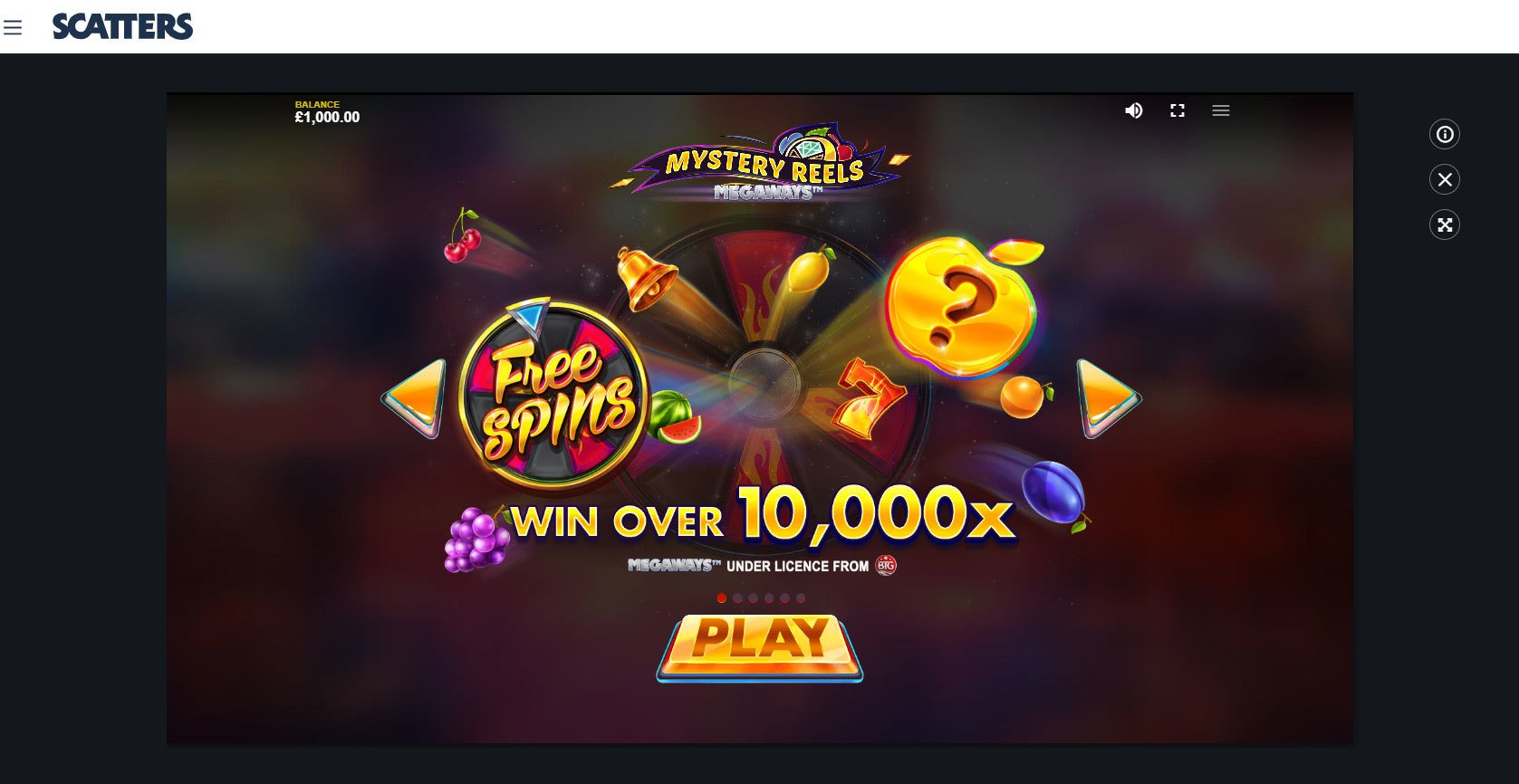 Megaways are definitely the latest hype in the slot making industry. It has been licensed by Big Time Gaming to over ten other studios, who made their own megaways slots.

In 2019, more than twenty different megaways were produced. Many of them are quite similar, but Mystery Reels Megaways is one which stands out from the rest of the pack.

Produced by Red Tiger Gaming and released last year following the success of Mystery Reels, this online slot has proven a hit with players.

To be honest, we might be a bit biased when it comes to this slot as the writer of this article has had a massive, close to €6,000, win on it. That said, we think it is lots of fun and always keeps us on our toes hoping for that Mystery Symbol to hit.

Note that these are purely subjective views on the top 10 most iconic slots with Scatters. We love all slots, and it was very hard to pick just ten here.

We also have Jackpot Slots and Live Casino Games.

And don’t forget to check out our amazing Casino Promotions and Rewards!