We're taking part in a €1.5 million casino promotion in collaboration with Pragmatic Play from January all the way throughout June. You should get onto this one. It's a cracker!

Play the chosen Pragmatic Play slots for your chance to win

It all starts with 10 games. New Games will be added to the promotion along the way and each 4 weeks some of the games will be changed. Don't worry, you'll be able to find them easily on Scatters in the section 'Drops & Wins’. You can also look out for the Drops & Wins logo on the game icons in the lobby.

It's really that simple. And you can follow the progress of the campaign in real time within the games as you play.

The leaderboard is ranked in accordance with the score, which score is based on the highest single spin win amount on any qualifying game adjusted to the amount of the bet.

Weekly prize pool of €30,000 in total across 150 cash prizes where the prizes are awarded to the winning players as follows: 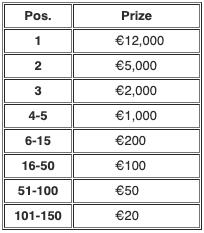 Each promo week includes seven daily prize drops. The prize drop will end at 23:59 CET/CEST or when there are no more prizes left. The first prize is €1,000 per day and you can win more than one prize per day. The total prize pool is €4,643 per day split like this: