We all know that Play’n GO has a special relationship with Lewis Carroll’s novel Alice's Adventures in Wonderland, which is commonly referred to as Alice in Wonderland.

However, someone has stolen the keys! And so your mission is to find the keys and return them to their rightful place.

In return, the Queen will bestow upon you a fair share of Wonderland’s enormous treasure.

In Agent of Hearts, non-winning spins can trigger random Wilds which offer smaller wins throughout the game.

Working their magic are four of Wonderland’s most-known characters: the Mad Hatter, Cheshire Cat, Caterpillar, and Dormouse. They work their magic across the cluster grid as they transform and destruct symbols to help you on your mission to release the Mega Wild and free the Queen’s heart!

Using the cluster pays mechanism, players get a win when five or more matching symbols are adjacently connected on the reels, unusually laid out in a 7-7-5-5-5-7-7 arrangement.

Play’n GO has said that this slot is highly volatile, giving it a rating of 8 out of 10. This is a characteristic amplified by the one-off nature of the central Queen’s Heart Free Spin feature. This game should suit most bankrolls since it employs the standard Play’n GO range: starting at 20c, rising to €100 per spin. 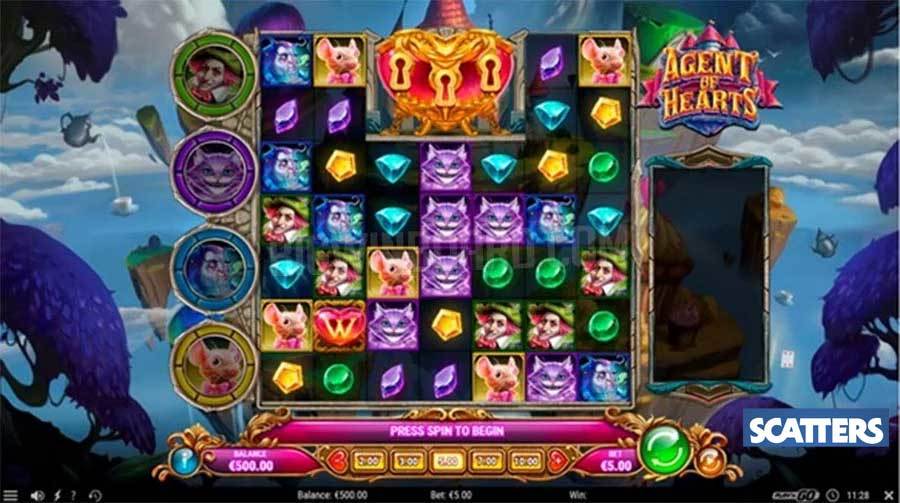 There are eight regular paying symbols, half of them fall under the low pay sector, made up of gems in various colours.

The remaining half fall under the premium agent symbols, which are characterised by the Mad Hatter, the Cheshire Cat, the Caterpillar, and the Dormouse.

The values vary wildly, and a cluster consisting of 15+ premium symbols can trigger a payout worth between 40 times and 1,000 times the stake. To make it more exciting, Wilds may appear throughout, assisting with the clustering by replacing any pay symbol. 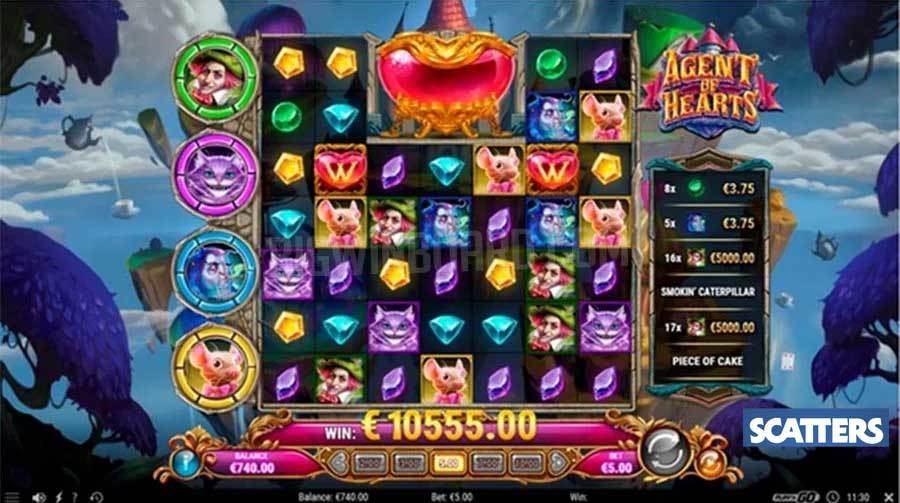 Slot Features of Agent of Hearts

The Cascade System deletes winning clusters from the grid, filling the empty gaps with new symbols - potentially leading to more cluster wins. When you do not land new wins, you will proceed to the next spin.

The game sometimes offers a second chance on non-winning spins through the Random Hearts Wild feature. In this case, 4 to 7 wilds are randomly dropped onto the reels, substituting all symbols except for keys.

High paying agent symbols are collected when they create a winning cluster, and you will unlock their respective feature each time you collect six of them. If you are lucky, the White Rabbit might appear to instantly unlock an Agent feature. These features are triggered after any winning combinations and cascades come to a halt. They cannot be retriggered and are awarded in a set order if more than one has been unlocked like so:

The other symbols that you will encounter in Agent of Hearts are keys. When you collect 3 keys in one spin you will trigger a Queen’s Heart Free Spin.

This spin, which cannot be retriggered, plays out all four agent features described above. Once cascades conclude, the Random Heart Wilds feature plays before a 3×2 Mega Wild leaps onto the grid, substituting for all symbols.

Lewis Carroll would never have thought that his novel would have ended up powering slots, obviously because slots had not been invented by then!

But we are also sure he would never have imagined the hype this novel gained, inspiring so many movies, board games, card games, jigsaw puzzles and video games.

We wish you luck as you to let yourself free-fall down the latest rabbit hole slot by Play'N GO.

If you enjoyed reading this article, then we suggest that you also check out the following: