Slot veterans will immediately identify the similarities between The Green Knight and The Sword and The Grail, the main being that both rely heavily on massive progressive multipliers.

Sir Gawain was the legendary King Arthur’s nephew, who also joined his uncle at the Round Table with the rest of the Knights. But Sir Gawain was not elected to the Knights’ Table by nepotism but due to his bravery. It is stated in a 14th century poem that Sir Gawain accepted a rather unusual challenge from a huge Green Knight who appeared in Camelot on New Year’s Day to challenge the knights. What follows is a chivalric tale where Sir Gawain keeps his head by proving his honour to the Green Knight. 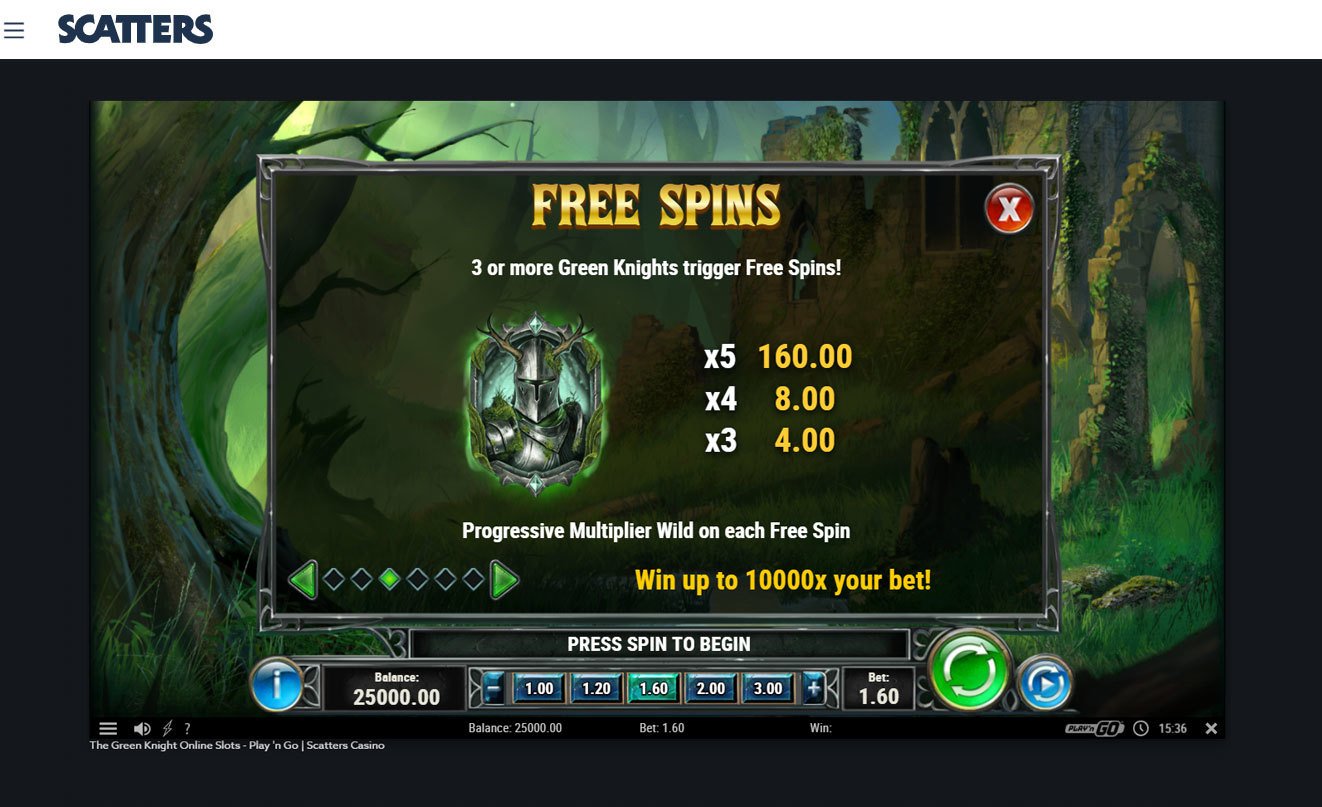 The Green Knight is a volatile game, with an RTP of 96.27%, and each spin can cost between €0.10 to €100. Once the stakes have been set, the player is transported to the romantic Arthurian world, where play takes place on a 5-reel, 20-payline area. Visually, The Green Knight is very similar to The Sword and The Grail – both with a multiplier meter located above the grid. However, the backgrounds are very different, with a spooky green wood on the left and a derelict old building on the right. It turns even more mystical during Free Spins, probably because the Green Knight comes to fulfil the end of his bargain.

As for the symbols, the lower end is taken up by 10 to A card royals, except a 'T' is used in place of a '10' symbol. The picture premiums are made up of:

Values for a five of a kind premium win range from 7.5x to 25x the bet. 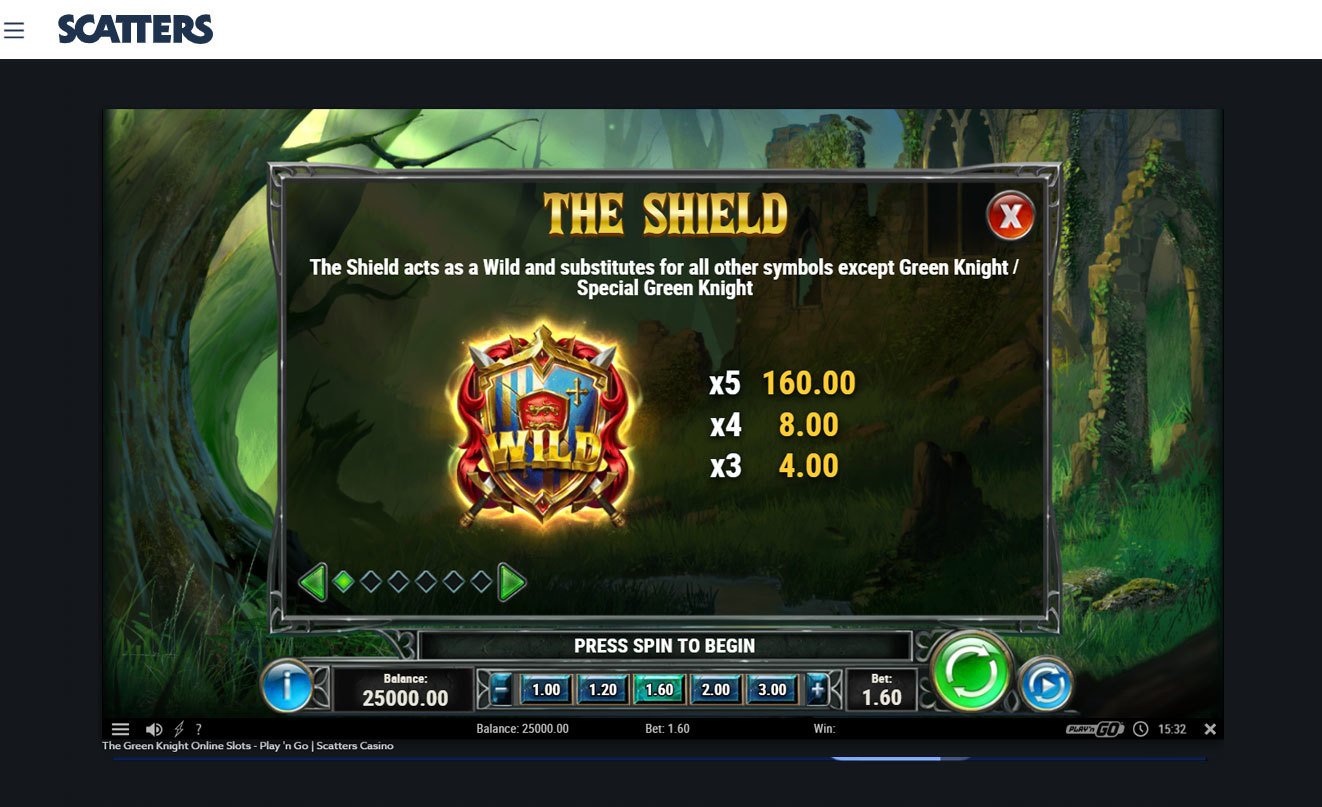 A fundamental part of the excitement is delivered by the Wilds, which replace any pay symbol to help complete a win. 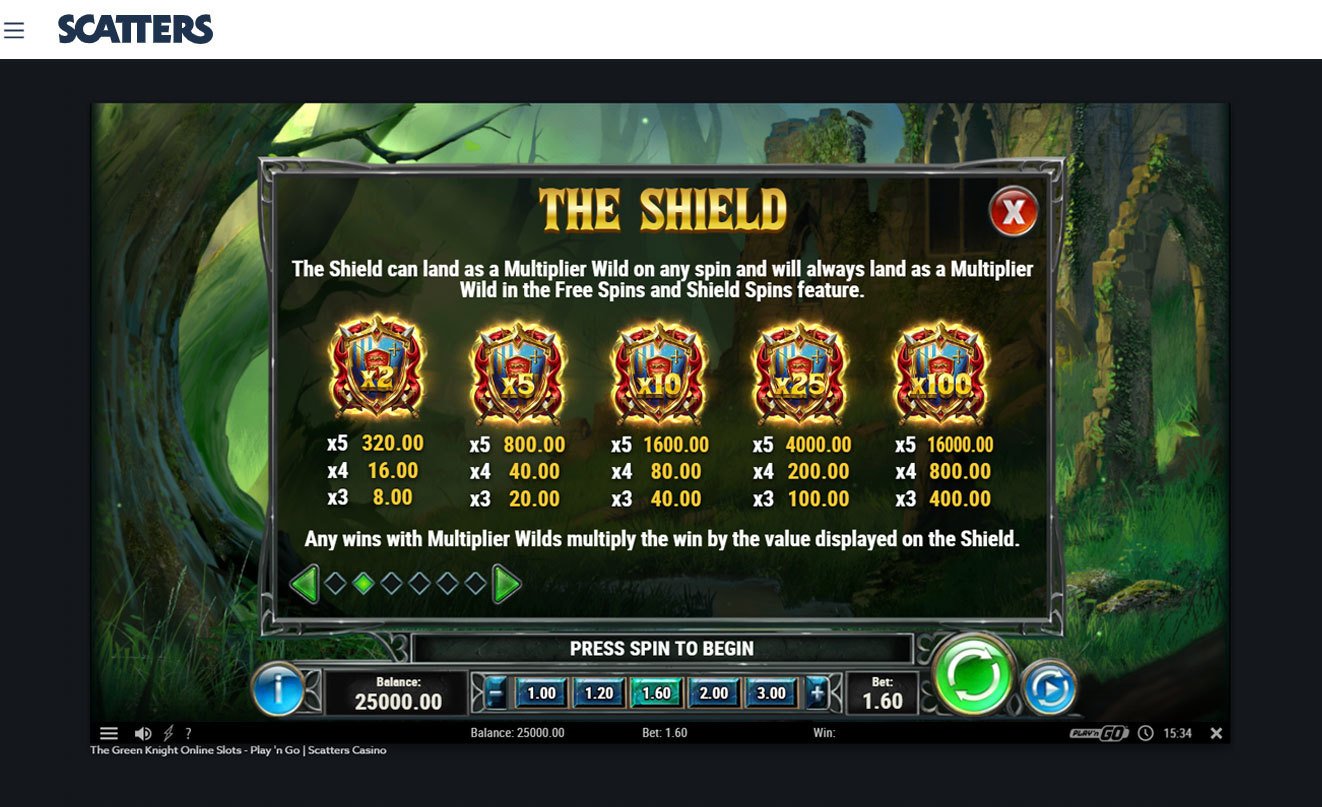 Aside from the regular Wilds, there are Wilds that also carry multipliers of 2x, 5x, 10x, 25x, or 100x.  When Wilds appear in a winning combination, their multiplier is applied to the regular payout. Green Knight Slot Wilds also hand out amazing wins if they form a winning combination on their own. A line of five regular Wilds would trigger a payout of 100x the bet, while five of the x100 wild multipliers would dish out a staggering 10,000x.

If 2 Green Knight symbols land on a free spin, the free spins are put on hold while 5 Shield Spins are activated. During Shield Spins, the current wild multiplier is locked in for the duration of the feature. If players have any free spins left, these are played when Shield Spins conclude.

The Play'n GO team has once again created a pleasant slot with features that can dish out serious rewards. While Wild multipliers aren’t uncommon, they don’t often have the highest values. What makes them extra desirable are the crazy combination payouts when they land across a payline.

The highest Green Knight Slot payout would be a 10,000x payout for five of the 100x wilds. For those who are fascinated by the magic of mathematic: the max exposure has a probability of occurring once in 55,555,555 spins.

While you can technically hit the maximum payout using a line of Wilds, most players will collect their best earnings from the accumulated total of free spins. Having a guaranteed progressive wild multiplier on each free spin certainly kicks up the excitement.